Written and directed by Chris Hudson for the Cambridge Drama Festival in 2012, this play was runner-up in the Best New Play category and was co-performed by the winner of the Best Actress Award, Fran Burgoyne.

A Muse's Will was also put forward by both the festival committee and the adjudicator, Jan Palmer-Sayer, for the George Taylor Memorial Award for one act playwriting. The judges' appraisal of the play said 'It's an original idea and the writer has clearly captured the period and presents it in an authentic yet conversational style.'

"A playful imagining of what happens when William Shakespeare is visited by his Muse." 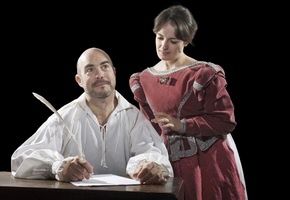 A Muse’s Will by Chris Hudson is a playful imagining of what happens when William Shakespeare is visited by his Muse. By turns fiery and flirtatious, inspiring and infuriating, Will’s Muse helps him as he works on As You Like It, creating, in Rosalind, his greatest female character. Along the way, they talk of love, writing, the theatre and Will’s life, as they ‘ascend the brightest heaven of invention’ together!

Performed at the Mumford Theatre, Cambridge, in May 2012. Photos (up, left): Fran Burgoyne in her prize-winning role as The Muse, and Tony Dutton as William Shakespeare in Chris Hudson's play A Muse's Will.

(c) Chris Hudson. Nothing on this page may be duplicated elsewhere without first obtaining the written permission of the owner of Historyonics theatre company. Any queries, please contact the webmaster via the email link provided in the upper right corner.
Cambridge theatre, Historyonics, theatre, historical focus, Cambridge, Cambridge-based, Histeryonics, As You Like It, Christopher Hudson, History of Britain, 2000 years in 2 hours, theatre company, Cambridgeshire, local theatre, Shakespeare, history, historical, plays, evening, things to do