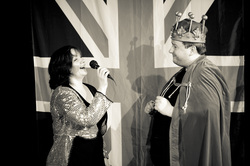 Our first show, in 2010, was The History of Britain (2000 Years in 2 Hours!) by Chris Hudson, a satirical dash through British history in sketches and songs. This play parodied the major events and characters in our island's past from Boudicca to the Crazy Frog! 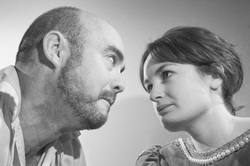 In 2012, our entry in the Cambridge Drama Festival was A Muse's Will by Chris Hudson, a playful imagining of what happens when William Shakespeare is visited by his Muse as he writes As You Like It. Fran Burgoyne won the Best Actress award for her role as the Muse, and the script was runner up in the Best New Play category. 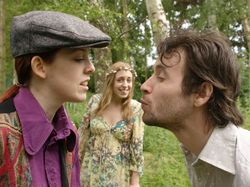 Our 2013 production was a swinging sixties version of As You Like It, performed in July at the ADC Theatre. This show saw Shakespeare's popular comedy re-imagined for the flower power generation and featured original new music and colourful costumes in what one critic described as 'a production with great strength in depth with so many enjoyable performances'. 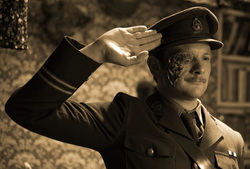 Broken Soldier in 2014 followed one soldier's attempt to come to terms with a devastating facial wound suffered during the First World War. Inspired by the work on Francis Derwent Wood in the Masks for Facial Disfigurement Department, the play is a poignant story of the struggle faced by those who survived the Great War but at a cost. 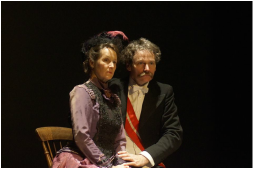 As part of the 2014 University of Cambridge Festival of Ideas, Historyonics joined forces with Anglia Ruskin Creative to present this new play by Sean Lang, which examined the events leading up to the start of the First World War following the assassination of Archduke Franz Ferdinand.

The Two Gentlemen of Verona 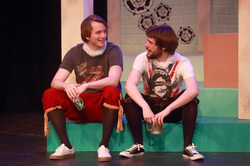 To mark the 400th anniversary of the death of William Shakespeare, Historyonics collaborated with Combined Actors of Cambridge to present The Two Gentlemen of Verona. This production bridged the gap between Shakespeare's era and our own by using a mash-up of Elizabethan and modern costumes, music and props to create an anarchic and irreverent show which attracted our biggest audiences to date.
Cambridge theatre, Historyonics, theatre, historical focus, Cambridge, Cambridge-based, Histeryonics, As You Like It, Christopher Hudson, History of Britain, 2000 years in 2 hours, theatre company, Cambridgeshire, local theatre, Shakespeare, history, historical, plays, evening, things to do